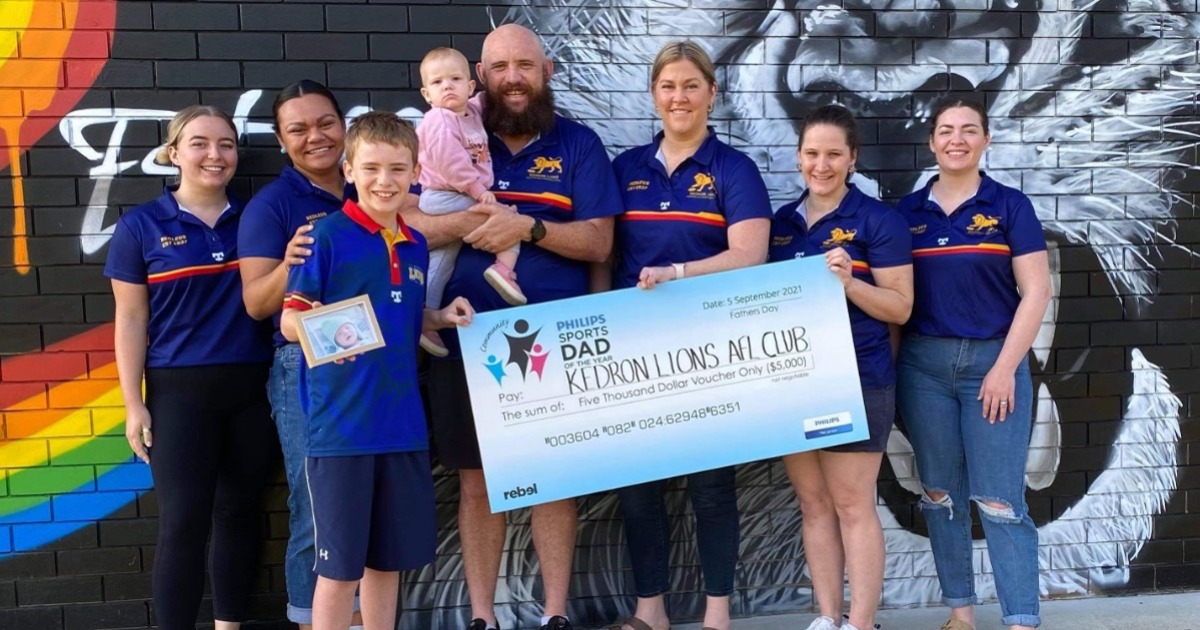 Wavell Heights local Scott Peeler-Hammond, a father of three, has won the Philips Community Sports Dad of the Year award, the first winner from Brisbane in the program’s eight-year history.

Hammond, who received a $5,000 cheque, will donate his winnings to the Kedron Lions AFL club, where he’s a valued member who carries multiple roles including being senior president and coach of two teams.

“It is an amazing honour to win. I do what I do because I love coaching and our club. To receive an award like this is just an incredible bonus. The fact that I do it all with the kids a part of the community just makes it all the sweeter,” Hammond said of his win.

Known as ‘Spud’ around the club, Hammond was nominated by fellow Kedron AFC member Felicity Rogers for his tireless behind-the-scenes work. Besides his numerous roles in the club, he’s also a devoted dad to 11-year-old Hudson and 18-month-old Gretchen.

“He has built stronger connections between the junior girl’s and senior women’s programs and helped to strengthen the connection between the senior men’s and women’s teams as well as organising gala days,” Felicity said.

“Spud just puts his heart and soul into everything at the club and has helped foster an amazing and supportive culture,” he added. To him, Hammond is a father figure to many players at the club and provides support to players beyond just football.

Felicity said the club has also helped Scott through some hard times, after the tragic passing of his newborn daughter Maisie in 2019. Hammond experienced the loss of Maisie just hours after her birth and the female playing group rallied around him and his family during this time, with many players attending Maisie’s funeral.

Aside from the cash prize, Hammond also received some Philips products including the Shaver 9000, and Bodygroom and Multigroom 7000, which he said was handy for “a guy who shaves his head at least twice a week!”

About the Philips Community Sports Dad of the Year

The annual Community Sports Dad of the Year is designed to reward the contributions and positive impact that Australian dads make to their families and community both on and off the sporting field.